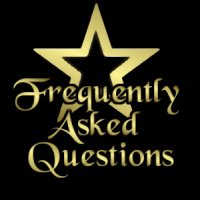 Q: How did Al get a star? Could you please explain the process?

A: The only way to get a star on the Hollywood Walk Of Fame is to be nominated and have your nomination accepted by the Hollywood Chamber of Commerce review board. Anyone can nominate, including fans, which is the route we took. Only a handful of the hundreds of applications submitted each year are accepted, and sometimes it takes several years before a nomination is accepted. As such, not everyone who gets nominated eventually gets accepted, but Al's accomplishments warranted a star and we're very very excited about it!

The actual nomination process involves an extensive application and the compiling of a lot of material to be included with it. Once the nomination was selected, it was up to us to put up the money and sponsor the star. That’s where you came in. Your contributions were a very important part of this whole process!

Q: So how much did that cost?

A: At the time Al's nomination was accepted, it cost $40,000 to sponsor a Star on the Hollywood Walk Of Fame. When we started, the price was $15,000. The Hollywood Chamber Of Commerce raised the price from $15,000 to $25,000 on February 9, 2007. In December 2010, the price was raised again to $30,000. In 2017 the price was raised to $40,000. The money is used to pay for the creation and installation of the star, as well as maintenance of the Walk of Fame. If you are thinking of nominating a celebrity, please check with The Hollywood Chamber Of Commerce for the current price and process.

Q: When did Al receive his star?

A: Al's nomination was accepted on June 22, 2017. The ceremony happened on Monday, August 27, 2018 at 11:30 a.m. PDT. It was free for the public to attend and lasted about an hour. About 1,500 fans showed up in person to help us celebrate. The ceremony was also streamed live on the Hollywood Chamber Of Commerce website.

Q: Where is Al's star located?

A: Al's star is located at 6914 Hollywood Blvd. It is on the south side of the street across from the Chinese Theater. The star points east. His star is in the second row, closest to the buildings, His immediate neighbors in the second row are Barry White to the east, and Toshiro Mifune to the west. His immediate neighbors in the original row are Roy Clark to the east and Irving Reis to the west.

Q: Who were the celebrity presenters at Al's ceremony?

A: The celebrity presenters were Thomas Lennon and Dr. Demento.

Q: So, Al knew about this campaign, right?

A: Well, since he showed up at the ceremony, yes!

Al and his management had been involved since very early on in the process. When we first approached Al about it, his exact words were "I heard about that. I think that's great!" We went through all proper channels, and acquired the needed letter of agreement and permission to pursue this venture. Both Al and his management gave permission, and we got written agreement and support from both. We invite you to confirm with the office of Jay Levey, Al's manager, if there are any questions.

Q: I've still got a question or would like more information.

A: We'll do our best to answer and provide you with the information you seek. Join us on our official facebook page, and ask there, or send an email to dave@weirdalstar.com.

A: We are a group of "Weird Al" Yankovic fans that strongly feel Al deserves a star on The Hollywood Walk Of Fame. Our team consists of two main contacts who donate their time and energy to keep the campaign running smoothly, and countless of extraordinary volunteers who assist them on a daily basis.

If you wish to contact us you may do so - 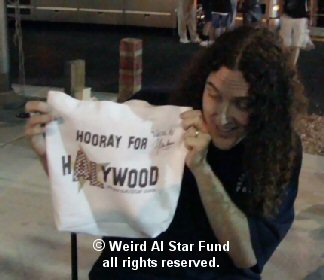